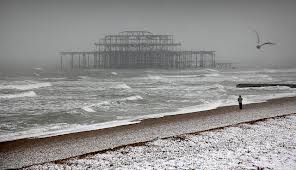 Maybe Eddard Stark was right and we soon will see scenes like this one again in Brighton!

Our friends up in the north of the U.K. have had their part of the snow already. But here the days have been crisp and clear, with more sun hours in East Sussex in the month of january than in years.

As the year reaches its darkest period around the solstice of december, the days are getting slowly but steadily longer again. And although there are many signs of the upward movement in nature, it will take still several probably harsh months to get to the start of spring.

One has to maintain patience and remain protected from the cold winds that affect the crucial organs of this period; the kidneys. In oriental culture keeping the centre of the body warm and protected is of crucial importance. All the willpower and forward drive is stored in what in Japanese is called ‘Hara’, the lower abdomen of which the kidneys are the deepest part.

In the language of Oriental knowledge, the kidneys store ‘the heaven before’,  the ancestral energy. They control what is called in Chinese: ‘Jing’, which means ‘ Marrow’. The kidneys belong to the ‘Shao Ying’ the smallest Ying, the deepest energetical part of the body. The ‘Marrow and the Deepest Interior’ are an indication of the importance given to the kidney energy.

‘Jing’ is the first part of a human that develops as an embryo; the central nervous system with the brain, the hormonal system, ovaries and testicles and later on the bone marrow, teeth and hearing.

For the survival of the race this aspect of our body should be kept in optimal conditions. In all Oriental practice the preservation of the energy of the ovaries and testicles is the long-term goal. It is maintained at an optimum condition by the ‘Heaven after’ which is based on the quality of our breathing and our diet.

Most people don’t realise how much energy is needed to keep our body temperature  around 37 degrees centigrade, therefore the modern western habit of eating cooling foods all year round are causing serious problems. Eating not only salads but drinking fruit juices in combination with sugar and milk products in the winter period causes massive phlegm production, making the body sluggish with its immediate effect on immunity.

Bring out the warming winter stews and soups!

The nostalgic reflections based on the almost standstill in nature invites us to look to the future again, laying the basis of the coming year. And although life can look vulnerable it’s not fragile.

Last week, in my village in Barcelona province, I saw the first almond flowers, covered in frost. A spectacular poetic sight that makes you wonder. A strong little flower almost frozen but it holds on to the branch that holds on to the stem that stands with its roots in the earth, like fragile people, covered in the hardness of circumstances who keep going on. 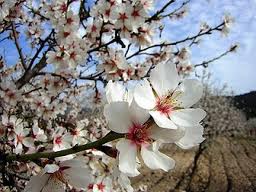 A beautiful image of the fact that life is not as fragile as we sometimes think. The mother of an old friend, who was born in Indonesia, comparing the life of homeless people in Holland with those in her own country always told us: it’s easier to be poor in a tropical country. Definitely true.

I see the homeless around Hove sleeping in the shop entrances and apart from the loneliness they emanate sleeping on the street, you think about the cold and humidity they have to deal with. I moved from Amsterdam to Spain in 1993 but when I return to Amsterdam, I still meet people who were living on the street when I left and are still doing that now, 22 years later. Although there is a pungent sadness about their lives, it is obvious that their kidneys are strong.

Their life might be mixed up with drugs and alcohol but their ‘Jing’ which is the base of the willpower to survive is extraordinarily powerful.

‘There is much to be learned from strangers’ and sometimes we tend to judge too easily.

I would like to share one of my favourite videos in which Delphine Galou sings an Aria from the Matthäus Passion from Johann Sebastian Bach: Erbarme dich mein Gott. (have mercy my Lord).

Galou is a contra alt and the timbre of her voice enhances the dramatical poetry of the piece. She is accompanied by an outstanding ensemble that makes for an performance that, I believe, wont leave anybody untouched.